Leading the Way in PTC

BNSF has completed installation of all mandated Positive Train Control (PTC) infrastructure on our network. We are operating trains with PTC protections on the mandated lines as we continue to test and refine this highly complex system.

As per the federal mandate, BNSF has installed the PTC infrastructure on all 88 required subdivisions, covering more than 11,500 route miles and 80 percent of our freight volume. We are also installing PTC technology on subdivisions beyond the mandate. We are running more than one thousand trains daily with PTC as we test operating in revenue service across our entire mandated territory. On June 13, 2018, BNSF announced that we nonetheless submitted a request to the Department of Transportation (DOT) for a two-year extension of the PTC deadline. The Federal Railroad Administration (FRA) approved the extension request in September 2018. The December 31, 2020 extension is required due to the FRA’s current interpretation of the law that full implementation status cannot be achieved until all non-BNSF trains and/or equipment operating on our PTC-equipped lines are also PTC-compliant. See the full story behind the extension request. 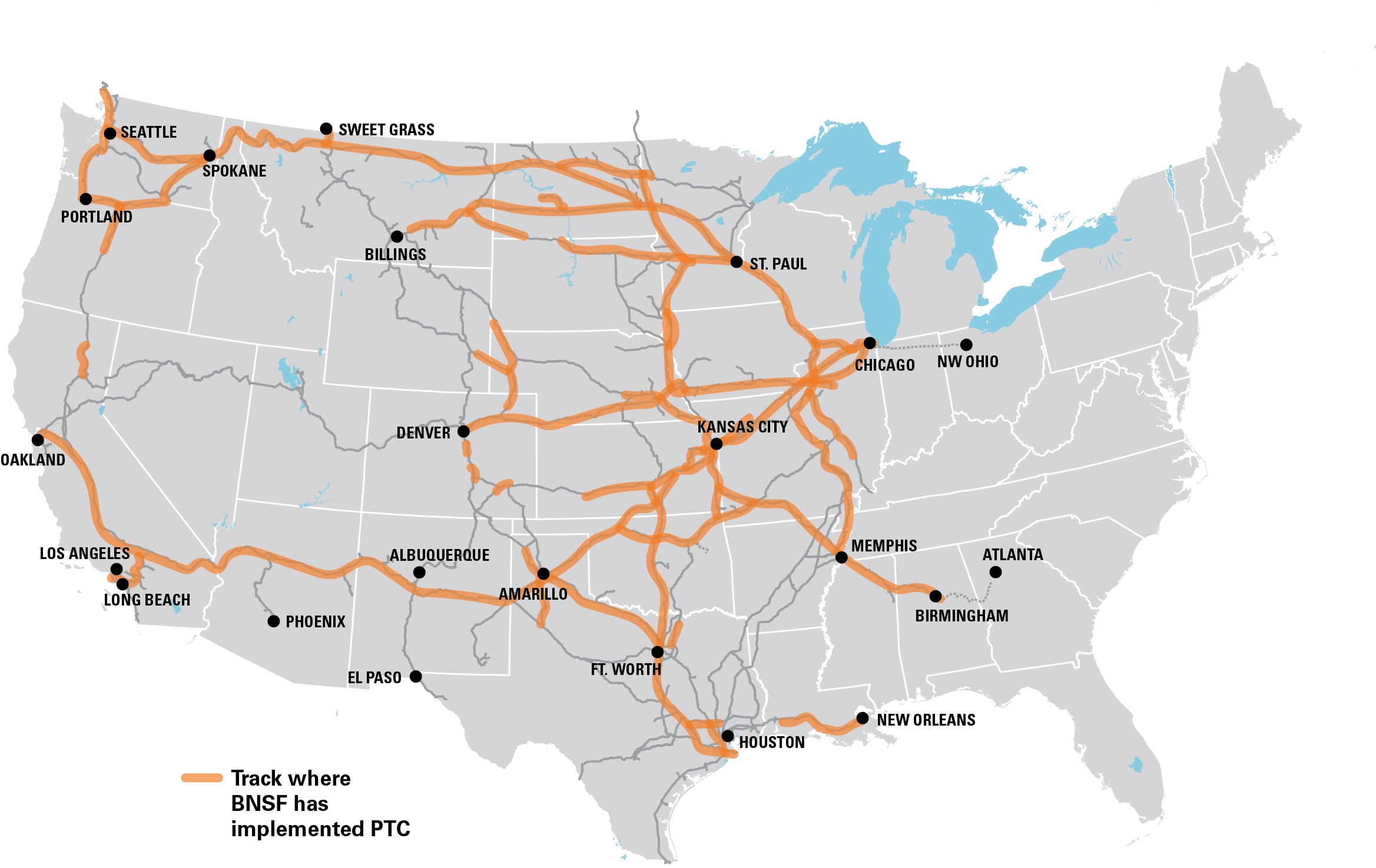 On Track for Success

BNSF has invested more than $2 billion in PTC implementation. We have operated approximately 2 million trains with PTC and continue to test and refine this highly complex system that must work as designed to support safe and efficient train operations. Across BNSF’s required subdivisions: 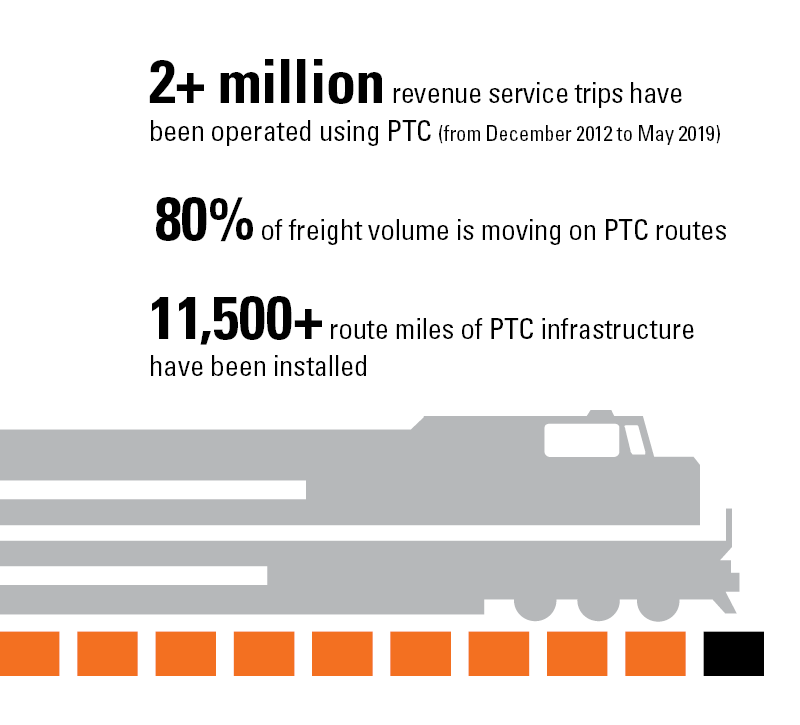 These metrics represent where BNSF stands in some key areas as of March 31, 2019. They are derived from BNSF’s quarterly PTC progress report to the Federal Railroad Administration (FRA). 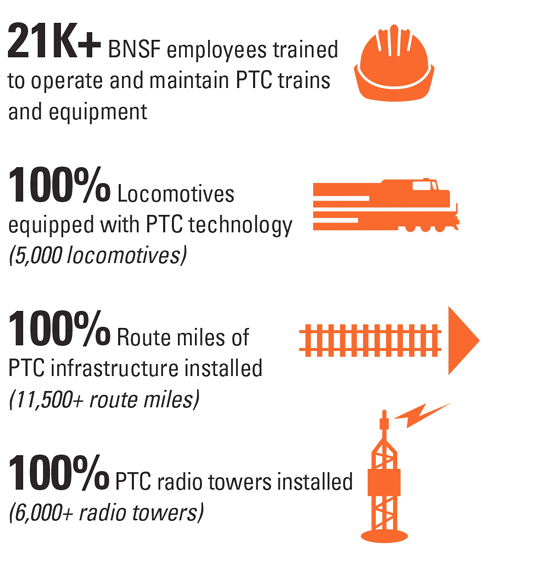 What is the deadline to implement PTC?

The Rail Safety Improvement Act of 2008 mandated that PTC technology be installed and operating on routes that carry passengers and/or toxic-by-inhalation (TIH) commodities by December 31, 2015. In late 2015, under the Positive Train Control Enforcement and Implementation Act, Congress extended this deadline for all railroads by at least three years to December 31, 2018, with the possibility of an additional two years (December 31, 2020) for testing and fine tuning an already installed and at least partially operational PTC system.

How has BNSF complied with this mandate?

BNSF was the first U.S. Class I railroad to complete our implementation plan. At the end of 2017, BNSF completed installing the PTC infrastructure on all 88 required subdivisions, covering more than 11,500 route miles and 80 percent of our freight volume. BNSF has operated approximately 2 million revenue service trips under PTC, providing another layer of safety to our already robust safety program. We are currently running more than one thousand trains daily with PTC as we continue to refine the system and resolve technological challenges.

Why is BNSF filing for an extension?

While BNSF has met the deadline for PTC implementation, other railroads, including commuter and short line carriers, operate trains across BNSF’s PTC-equipped lines every day. The December 31, 2020 extension is required due to the Federal Railroad Administration’s (FRA) current interpretation of the law to mean that full implementation status cannot be achieved until all non-BNSF trains and/or equipment operating on our PTC-equipped lines are also PTC-compliant. This interoperability of PTC systems between Class I, commuter and short line rail carriers remains a challenge.

BNSF is leading the North American freight rail industry with PTC interoperability. We are actively working with each of the approximately 30 railroads with which we need to be interoperable to identify their needs and how we can be of help. This assistance ranges from technical, operational and regulatory advice to a variety of services such as back-office hosting and crew training.

We have achieved interoperability, and PTC is active for several passenger railroads, including Amtrak, Metra, Metrolink, Northstar and Sound Transit where they run on BNSF. This is an important achievement because one of the primary purposes of PTC is to provide protection where railroads run freight and passenger service. We have also accomplished interoperability with short line roads Montana Rail Link, Louisiana & Delta Railroad and Dakota, Missouri Valley and Western Railroad.

We look forward to expanding interoperability and will continue to work with the FRA to ensure PTC enhances rail safety wherever it operates.

PTC is technology that overlays existing train hardware and software. As mandated by law, PTC is intended to prevent: 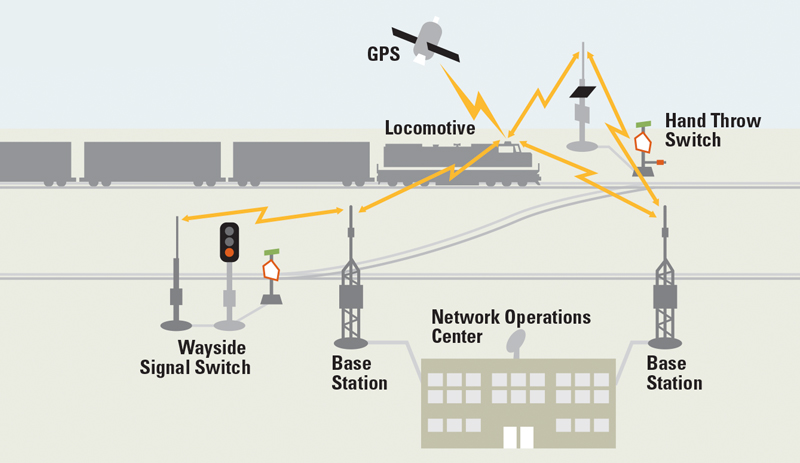 There are three main elements of a PTC system, which are integrated by a wireless communications system: